MS-DOS is most commonly represented as a shy schoolgirl, with black or dark grey hair in pigtails decorated with "DOS"-shaped hair ties; her hair ties are usually blue, but are sometimes depicted in the colors of the MS DOS prompt logo as shown in Windows. She wears round glasses, a white button-down blouse with a light blue skirt and suspenders. She carries around a keyboard, and is usually peeking around corners.

The implication is that, like MS-DOS itself on non-NT versions of Windows, she is always lurking somewhere in the background, just out of sight.

She originally represented the DOS prompt (In early pictures, including the one in the infobox, her armband says "Prompt") and assumed to be a catch-all for all the DOS OSes, but now more specifically represents MS-DOS. 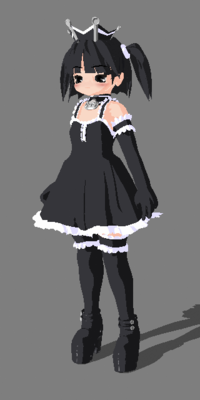 MS-DOS-tan has also been drawn in an alternative outfit resembling EGL style, wearing a black sleeveless minidress, long boots, full-length gloves, and a choker, all with white lace trim; her stockings reach to just below the bottom of her dress' trim, and she wears a matching tiara. In some fanon, this portrayal is her younger self from before the OS Wars.

Another representation of MS-DOS is Windows 3.1-tan's cat, who can shapeshift into a catgirl in a nurse's outfit. It isn't known if she was an alternative MS-DOS character since the 'main' MS-DOS-tan is rarely drawn, but in most fanon, both characters co-exist.

In the backstories created at OSC, MS-DOS-tan is the twin sister of PC-DOS-tan; younger sister of QDOS-tan, and biological daughter of DR-DOS-tan.

In the 1980's, she happily grew up as part of the Microsoft-IBM Family and lived with PC-DOS-tan, Windows 1.0-tan, Windows 2.0-tan, their stepsister OS/2-tan, and Xenix-tan the family caretaker. MS-DOS-tan and PC-DOS-tan were especially close and had nearly identical personalities but the break-up of the Microsoft-IBM Family changed both of their personalities radically, and during the 1990s, they were only able to confront each other as rivals.

MS-DOS-tan lives with the present day Windows Family faction, but is a timid shadow of her former self, not just from the Microsoft-IBM Family break-up in 1990, but also from her diminishing popularity and influence.

Although a pacifist during the OS Wars, she avoided the fate that Windows 1.0 and 2.0 suffered due to passively complying with the Family's imperialist ambitions, and because she was still influential during that time. It was by the time that ME-tan was born that her influenced diminished radically (ME cannot boot DOS without a bootdisk, and is the last DOS-based Windows). She cares for all of her family, but can't seem to relate to them anymore except for 3.1 and 95 in the Windows Family; 1.0, 2.0 and PC-DOS in the Binteeji Renmei.

She and PC-DOS-tan have the habit of reuniting (in secrecy from the Windows-tans of the Windows Family, who do not know of PC-DOS-tan's existence) with each other every so often and when they do, both of their personalities change dramatically, to their cheerful former selves.