Featured prominently below is a list of OS-tans, which are named after the operating system they personify combined with the Japanese suffix -tan (たん), an overly cute mispronunciation of -chan (ちゃん) (specifically a child's slurring of it). All were created by various amateur artists; and although the OS-tan phenomenon originated in the Japanese imageboard Futaba Channel and the overwhelming majority of the artwork is still produced in Japan, a growing number of international artists are contributing both fan-based and original artwork of their own. Therefore, this list is meant to record all OS-tans drawn or discovered to date, regardless of location, artistic merit or popularity of the system personified. Profiles will be provided for each character if possible; however, given the incongruous nature of this fan-based movement, these may not always be comprehensive.

In addition, a large number of computer-related characters are also included in this list, given that their important support role also makes them indivisible from the OS-tans (both in fan-based media and real life). These include personfications of hardware, software applications, browsers, websites, malware and game consoles. 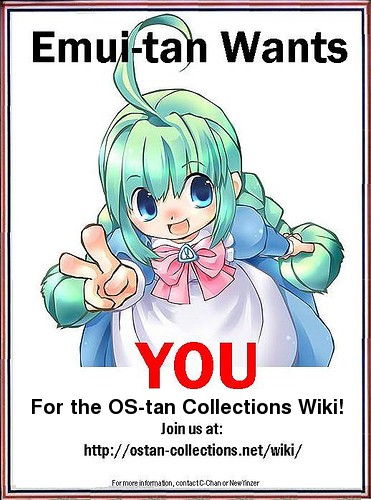