“Vis-tan”, as this character is usually known by among the OS-tan community, is the character personification of Microsoft’s Windows Vista Operating System. However, unlike its previous predecessors globally accepted common design, Vis-tan is one to not to have a set design that everyone accepts. This has brought about an air of controversy around it as everyone simply seems to want their designs as the accepted one. However, it can be said that there are popular designs that are most often seen, such as the “Visbou” and “Vistake” designs that are mainly supported by a Japanese image board called Futaba, while the +Nijiura+ image board supports “Chiivis-tan”, one of its more popular designs.

Vistan, as previously stated, has no standard appearance that is accepted by all people in the OS-tan community. Support to any design made is usually known to come from the local group of people of the site where the image originated from, as with the case of Futaba and +Nijiura+ where each site supports their versions and seem “disregard” the other’s. However, there are places where there is support for designs that originate from both image boards, but this is more of a subject of personal opinion of the people rather than common fact, as some may support one or another design.

The community of the Futaba image board had presented multiple proposals to implement a standard design for the Windows Vista operating system. Something peculiar about the Futaba designs is that they seem to lack any real representation of the OS itself, except for the occasional logo inclusion that makes its way to some of the drawings. Many character design proposal have been made, and most were liked. However, only two of those designs have come to be the most popular and overall supported by the image board:

For an outfit, she wears a ninja suit of a navy color; the suit’s hakama has open sides that show part of her legs, though this seemingly goes by personal preference of the artists. A signature item she wears with the suit is a red-colored scarf; this one is usually quite long, reaching down to her knees if not depicted as long as to reach the girl’s feet.

Another designs very popular designs was dubbed Vistake, a girl that wears a sailor fuku. Like Visbou, she has grey hair, but her hair is long, and is usually kept in a ponytail that bears a grey colored (or metal) screw-resembling hairclip. Another of these screw-like objects is found seemingly embedded on her forehead to (seemingly) match the hairclip. However, there have been instances where the design has been made to look like the “Xbox 360” logo, or at times simply not be drawn at all. She wears a red and white colored sailor fuku outfit. Of her clothes, the ascot, the shirt’s neck, the skirt and the shoes are colored in red, the rest in white. Her stockings are usually are striped red and white; though, this may be differ from artist to artist. In terms age, this one seems to vary much more than the Visbou design; many images have depicted her with apparent ages from 12 years old and going all the way up to 21 or so.

The +Nijiura+ community (much like in Futaba) have presented and give support mainly, if not only, to their community’s proposed character designs to personify the Windows Vista operating system. A thing that has been seen in common in all of the designs is that the character proposal are highly representing of their character. They have many designs presented, but in the same way as Futaba, only two have been more popular than the rest:

One of these is designs is known as Chiivistan, depicted as a magical girl-type character in a skimpy dress-suit combo. This fair skinned girl has green colored hair, said to be representing of the OS’ login screen and default background. Her hair is very long, usually reaching down to the lower portion of the girl’s legs; a small portion of it is usually kept in a pair of pigtails while the rest sits there on the middle. A collar of eccentric appearance floats or hangs around her neck; it has the Windows “shield” logo that is used to set apart all security features that the operating system has; underneath the shield logo the word “Vista” is written in green. 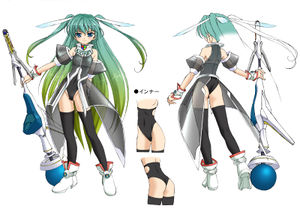 She wears a sort of penguin coat or vest of a black color. This coat is the only thing that she wears to cover her top, and even then it is quite the revealing piece, letting view of the whole center portion of her body, or at least that’s how it is being portrayed (it does seem to have a zipper, or something that would merge that area together). It can be noted that the lower portion of the coat she wears bears transparency, this reflecting on the Aero transparency features that the OS has. Nothing more than pair of black panties cover lower portion of her body; however, it is to note that these are a matching part of the outfit. Black stockings cover up most of her legs, up to her thighs; this while she wears a pair of boots that are either colored white or black, with red borders. Within this design, there are two separate variations of Chiivistan in terms of apparent age; one is is that of a young girl in a slightly more conservative outfit, while the other is a more matured girl bearing physical maturity comparable to XP-tan. The other design hasn’t been named as of current knowledge, but it is quite popular among the +Nijiura+ community; this design being that of a young teenager girl. This one has short gray hair, comparable to Futaba Channel’s Visbou design. This girl wears a more simple (and much more conservative) outfit; a one-piece, sleeveless sailor fuku outfit to be exact. However, she does wear sleeves that cover everything from her wrists to her biceps. Like the “Chiivistan” design, this one has a pair of stockings that reach up to her thighs. When it comes to coloring, this may be the Vistan design with the most color variations of all, having all of the colors representing each of the Windows Vista DVD cases (the two shades of green, the blue, and black). There are even instances where the outfit’s fabric has been given transparency to reflect on the Aero features.

There have been other suggestions as to how should the Windows Vista operating system be really personified. Among these, there are other OS-tans designs from both Futaba and +Nijiura+ that, though were eventually set aside for their two main character, were thought of as promising candidates to be the “standard” Vistan design.

Many people, both from the Futaba and Nijiura communities as well as other OS-tan communities and solo fans, have suggested that Vistans may be more than one person rather than a single person. In the Futaba community, it is said that their Vistake, Visbou, Spirit and Anubis designs are the ones that represent the four Windows Vista versions; while in Nijiura it has been represented by both a group of four Chiivistan of somewhat differing appearance and ages, or with four of their unnamed design of a white-haired young girl but wearing outfits with different colors to show for the DVD case and box. Within the OS-tan Collections community however, the designs preferences are more up to personal preference rather than a standard thought than anything else; while one may consider only the futaba standard, another may think of the Nijiura, or even a combination of the two, or simply make their own designs and “be done with it”.