Personality-wise, Mac OS-tan is short-tempered, and is known to throw memorable fits of insane rage when angered. Aside from her platinum-white bodysuit and apple adornment on her head, another memorable feature is the bomb she usually carries based on the standard Macintosh error dialog. She is frequently shown in pictures and comic strips trying to use these bombs against Windows-tans and other miscellaneous characters that annoy her (e.g., Toshiaki, the OSX-kuns). When offered appreciation, however, her temper subsides and she becomes relatively friendly, if perhaps a bit direct.

What does she represent?

Mac OS-tan was perhaps the first commonly-known and widely-supported Mac-tan during the early days of the OS-tan phenomenon. Given the popularity of the Windows platform, it is likely that Mac OS-tan was simply meant to be a standalone personification of the Mac Operating System, in the same way that Linux-tan was meant to be a lump-sum of all Linux distributions. Mac-tan with a rainbow apple on her head, a nod to the Classic Mac.

In early drawings, Mac-tan appears in her standard platinum-white body suit (alluding to the iMac/OSX design motif) but, also with a rainbow-colored apple on her head, a throwback to the classic Macintosh. Some manga strips also featured her battling against Windows 95-tan during the OS-tan Wars, during which time only the Classic Macs were available (System 7.5, for example), suggesting that she mainly represented the pre-OS9 Mac OSes at first. Even when she represents OSX, 95-tan is still portrayed as her arch-nemesis. 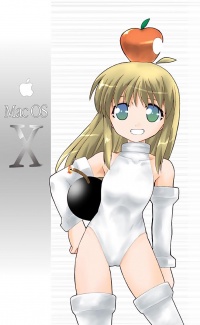 This shows Mac-tan as Mac OSX-tan, but curiously, she is seen wielding a Classic-era bomb.

However, as Mac OS9-tan and additional classic Mac and OSX personifications begain to emerge, the identity of the original Mac OS-tan has been subject to extensive variation. In recent years, artists have increasingly personified her specifically as Mac OSX-tan rather than as a classic Mac OS; even the apple she wears on her head is now increasingly drawn as red, or composed of a transulcent material reminiscent of the early G3 iMac designs. Some fan-based manga completely embrace and build upon the OSX-tan preference. Nevertheless, the OSX classification is not clear-cut either as numerous cat-themed Mac OSX-tans have appeared since, five of which have achieved near-canon status.

As a legacy from her earliest portrayals, even when she's a catch-all only for OSX, she is still seen wielding error bombs, when the error bombs were only in the Classic Mac OS and not OSX. Instead, OSX has a spinning beach-ball cursor as its loading and error cursor, but that is seldom, if ever depicted in drawings of OSX-tan. One justified possibility could be that although OSX doesn't use error bombs, the early versions of OSX supported dual-booting or emulating Mac OS9.

The Mac Manga portrays her as being OSX-tan, and in drawings of her and OS9-tan in their childhood, OSX-tan is portrayed as obviously being the younger one.

Her nickname of Shian is the Japanese pronunciation of "Cyan", the codename of the OSX Public Beta; another possible representation that would allow her to represent OSX while co-existing with the other OSX-tans.

Or a catch-all for all Macs?

In order to avoid confusion, it is suggested that Mac OS-tan remain as a generic personification of all Macintosh Operating Systems, despite the recent additions of Mac-tans representing specific system releases. This will help preserve the artistic and editorial integrity of the works produced featuring Mac OS-tan, as she is still drawn today, even alongside various Classic and OSX Mac-tans.